as if nothing happened, II

My son has been complaining about a stomach ache. I give in and tell him he can stay home from school, but he has to understand that I need to get some work done. Ironically, for a kid’s TV series. In fact, now that he’s here, I may as well ask him a few things. “If you had a zoo and there’s something you’d need to hide in a tank of sharks, what could that something be?”
“Money,” he says, “or a gold lion.”
I suppose there’s something universal to coins and the holy grail. Either that, or his idea of story has already been formed by what he’s seen and heard. Which leads to another question regarding Aristotle, but I’ll save that for another time. Holding the reins, as they say, is important in storytelling and I had started this little story wanting to make a different point. Namely: my son is very much aware that he’s not sick and shouldn’t actually be home. And so he sings and hums and reads and draws contently behind my back while I do some work.
When I next get up to make us some lemonade, he casually points at a drawing on the floor.
“I made that for you.”
He’s dancing now and singing a Santa song. I pick it up, sit down with the drawing and say: “that’s a really lovely drawing. It makes me a lttle bit sad.”
“I wish I could turn back time,” he says lightheartedly, “then the three of us would still live in the same house.”
He skips around some more and then suddenly stops, “BUT we wouldn’t have Door (the cat) then yet, and we wouldn’t know Levi (his new friend).”
If I had a zoo, I’d lock the power to turn back time up in a treasure box and hide it in a tank of sharks. 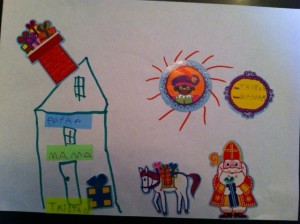